Norway from the Sky

It doesn't get much more beautiful than this.  This video has us dreaming about a someday trip to Norway.  The mountains, glaciers, and fjords are simply breathtaking.  The bright red houses and fishing boats are picture perfect.  The images captured from above are simply jaw-dropping.  You will feel like you have inhaled a breath of fresh clean air after watching this.

The detailed description below by the View From Above team describes the video and the extraordinary images they captured of Norway.

Welcome to the View from Above! A series that takes you on a Journey to some of the most beautiful places on earth! Few places on the globe can take bleak and desolate elements like those of winter, ice and snow, and turn them into beautiful landscapes of white mountain ranges and icy, green fjords. Norway is a truly beautiful country that yearns to be explored and is richly riddled with stunning wintery panoramas. Begin in Oslo, Norway’s modern capital, before exploring the hauntingly beautiful countryside; the powdery-white slopes of Hemsedal give way to the pristine fjords like that of Hellesylt. View From Above uses their cutting edge DJI unmanned aerial vehicles and drones, fitted with the latest GoPro cameras, to capture Norway’s iconic cities, towns and natural vistas.

Norway is most well-known historically as being the home of the Vikings. As Germanic tribes migrated north into Scandinavia during the early Roman reign they settled in modern-day Norway where their language and culture evolved. A clan-based society of warriors was formed, bent on expansion, who traversed the northern seas to pillage coastal villages all across Europe and the British Isles. Norway then begun its journey into feudalism and a lineage of kings dominated Norwegian history until 1905 when Norway became an independent nation, splitting from the Norwegian-Swedish conglomerate. Norway’s people, although affected by the widespread chaos of World War II, have largely retained their cultural and historical identity while embracing modernism.

The visitor to Norway will often arrive in the Norwegian capital of Oslo. Sitting well within the depths of the Oslo Fjord, Oslo is a world-class city that has deep ties to its roots. Just taking a stroll through Frogner Park will show you how enchanted Norway is with traditional philosophies, while museums like the Viking Ship Museum, Munch Museum and the Holmenkollenbakken Ski Slope Museum are all acknowledgements of Norway’s past. https://www.visitoslo.com/

Norway is well known for its excellent skiing facilities. Areas in Norway like Hemsedal are recognised by their ski resorts that are built atop the fluffy snow-covered mountains of central Norway. Sunnmoresalpane is also a perfect location for skiing. Although less busy than the other resorts, the mountain has wonderfully steep descents that will excite even the most experienced skier. https://www.visitnorway.com/en/what-to-do/active-holiday/skiing-in-norway/

Islands, like those in the Lofoten archipelago, are largely uninhabited for the most part, and have some of the most beautiful and untouched landscapes in the world. The little towns like Giske that do occupy some corners of the islands are dependent on the seas for survival. The dependence of some of Norway’s oldest communities on nature is immediately recognisable. Towns like Aheim and Namsos would have relied solely on the fjords for trade and fishing. Smaller villages like Oppstryn and Maura depend on the lakes and rivers of Norway’s interior for their livelihoods.

For visitors, Norway is primarily about nature, but what is easily noticable is how well its people have married with the land on which they live. When camping around the beautiful lake at Strynsvatn, visitors can marvel at farmhouses that almost look as though they are being swallowed up by the earth. Soil embankments scale the walls and grass grows on the roofs of small log cabins around the farms in Hellesylt fjord valley. Winding, desolate highways snake their way up the mountains of Hoddevik, below which surfers take to the crashing, icy-cold waves of the northern seas.

Wherever the visitor looks they are bombarded with some of the most amazing, natural vistas. But what seems more intriguing is the way in which Norwegians have adopted the most harmonious relationship with the land and sea. View From Above captures this magic in ways never seen before. View from Above could not have made these astonishing videos without the help of the DJI unmanned recreational drones. Witness these marvellous feats of modern technology on the website: https://www.dji.com/ Can we please have standing ovations for the gallant little drone, the DJI Phantom 3: https://www.dji.com/product/phantom-3 And a courteous bow to the valiant and impressive DJI Inspire UAV: https://www.dji.com/product/inspire-1 These drones would be nothing without the marvellous GoPro video cameras that make filming so much easier nowadays. Visit their website here: https://gopro.com/ And check out their new baby, the Hero 4 Session: https://shop.gopro.com/EMEA/cameras/hero4-session/CHDHS-101-EU.html This amazing video was shot and edited by: Kai Jonny Venoy https://aerialnorway.com. 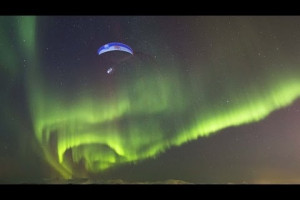 Paragliding Through the Aurora Borealis

Read 1083 times Last modified on 28 July 2016
More in this category: « Paragliding Through the Aurora Borealis
back to top