There are many reasons to travel to Bern, Switzerland's capital city.  It is a UNESCO World Heritage Site for its uniquely well-preserved medieval architecture, including the famous Zytglogge Clock Tower. The historic Old City is surrounded by the beautiful aqua colored Aare River.  In this short video we highlight some of the attractions that we explored on our 2-day visit to Bern.

When we arrived in Bern, we were immediately struck by the beauty of the Old Town and its unique architecture.  Before taking our first tour of the city, we checked in to our hotel, the modern and trendy Hotel Allegro, which is perfectly situated just across the bridge from the old city.  It was an easy walk across the bridge to reach the city.  The light rail trains also stop right in front of the hotel and can take you across the bridge very quickly.  The hotel gave us a Bern Ticket pass which allows you to travel for free on public transportation throughout the city.  This ticket is provided to visitors staying at least one night in a tourist accommodation in Bern.  We found this to be an excellent extra benefit of staying in Bern as it made it very easy to get around town, although walking is even more enjoyable to really experience the city.  We dined at the Hotel Allegro's Restaurant Giardino our first evening.  The restaurant offers indoor dining or seating outside alongside a picturesque pond.  We decided to enjoy our delicious Italian-style dinner outside. 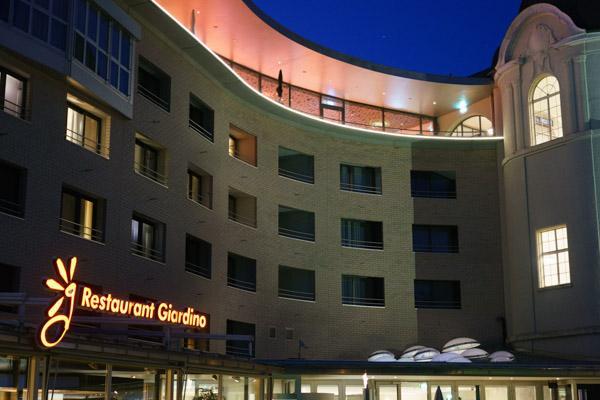 The next morning we met with our very gracious Bern Tourism guide, Annelies, who took us on a walking tour of the city.  Our first stop was the Farmer's Market on Parliament Square, which takes place every Tuesday and Saturday year round.  The large market has stands for many types of meats, cheeses, breads, cakes and pastries, as well as stands for flowers, spices, teas, various olive oils and much much more.

After our tour of the market, we walked over to one of the highlights of Bern - the distinctive Zytglogge Clock Tower, a medieval landmark located at the center of Bern. We were treated to a special tour of the inside of this old medieval clock tower that had also served as a guard tower and prison.  The astronomical clock with its large clock face is the most famous site in Bern.  The clockwork mechanism inside the tower is fascinating to watch as it clicks, spins, and rotates while the cannonball pendulum bobs back and forth and the figures rotate on the outside while the bell-striker chimes on the hour.  The rich history of the clock tower is considered a Swiss heritage site of national significance.

After the clock tower tour, we strolled along the main street of Bern, with its many cafes, shops, bars - some of which are located in vaulted cellars - and many unusual fountains that have fresh drinking water.  Our first night there, we came upon one of the fountain sculptures that perplexed us.  It was an ogre gobbling small children as he grabbed them out of his pocket.  We pondered that one while we sat outside having a coffee at a nearby cafe.  Read more on the story behind the Ogre Fountain here.  We then walked around the Parliament buildings to view the beautiful River Aare that flows around the city.  People can swim or float down the Aare during the summer, but one should be a good swimmer to navigate the fast current. 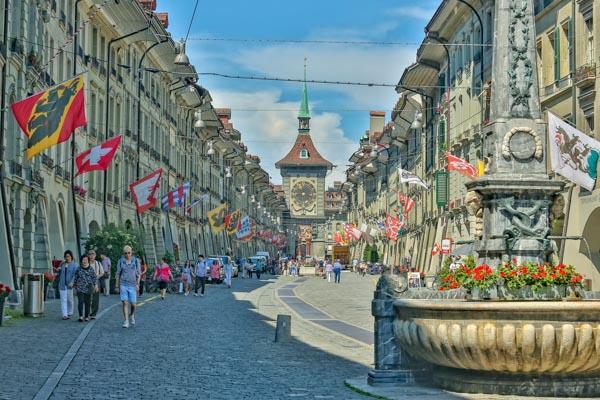 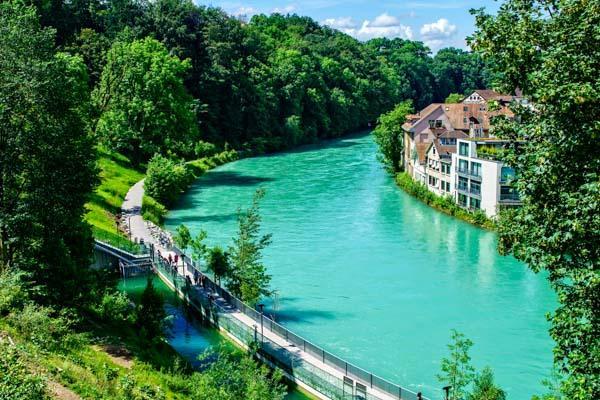 Our next stop was the Rose Garden, a floral park that sits on higher ground and provides a beautiful view of the Old Town and Aare river.  The Bear Park is also located here where you can watch a family of black bears frolic and play in their park.  As the story goes, the bear became the symbol of Bern because it was the first animal that was encountered in a hunt in 1191 when Duke Berthold V was preparing to chop down trees to build the city.  We then enjoyed lunch at the Restaurant Rosengarten where we could take in the magnificent view of the city while dining on traditional and Mediterranean style cuisine.  The food and service was quite good, and the outstanding view of the city was well worth it. 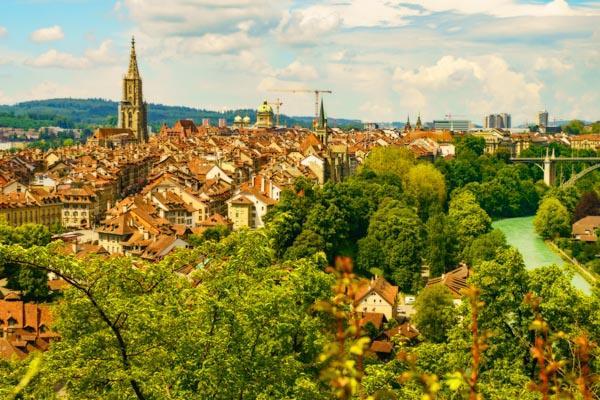 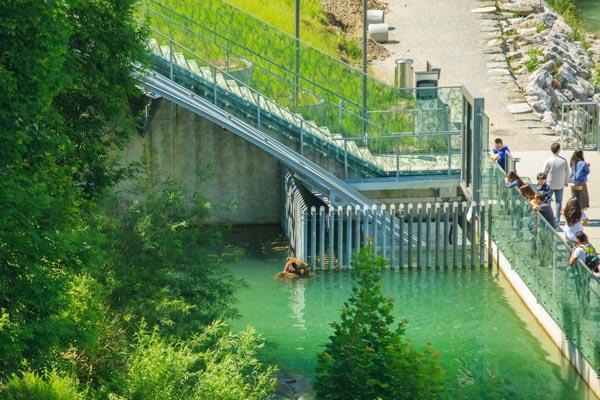 There are many museums in Bern, including Albert Einstein's house, which is located in the center of the Old Town and is where he developed his theory of relativity.  There is also the Einstein Museum that contains memorabilia, written records, films and elaborate displays to help illustrate and explain his revolutionary theories.

On our own in the afternoon, we visited the Bern Cathedral, where we climbed to the top of the church tower to see spectacular views of the city, the river Aare, as well as the snow-capped mountains of the Bernese Oberland in the distance. There is no elevator so climbing the 344 steps is the only way to get to the top and enjoy some of the best views of the city.  The church has the highest steeple in Switzerland and the main portal has 234 colorful figurines that depict the last judgment - quite a compelling sight.

Our final journey of the day was hopping on the Gurtenbahn, a fun ride on a funicular railway to the top of Mount Gurten, Bern's own mountain, where there is a beautiful and expansive park where you can relax and have a picnic and take in the breathtaking panoramic views of Bern and the Alps.  There are also two restaurants on Mount Gurten: The Tapis Rouge, which is a self-service family-friendly restaurant, and The Bel Etage Restaurant which offers a more gourmet experience. 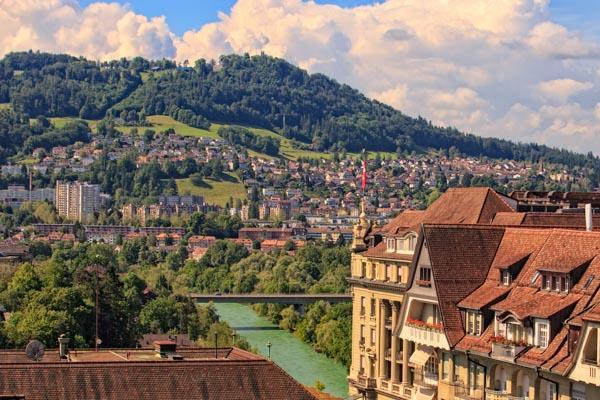 For dinner that evening, we enjoyed fondue and beer at the Lotschberg restaurant, which has a relaxed and casual atmosphere, reasonable prices and is conveniently located in the heart of the city.  Before returning to our hotel, we decided that we must take a look at the highly recommended Kornhauskeller, a huge underground restaurant and bar that is not easily identified from ground level. We were expecting a large grand entrance, but instead it was a small doorway area with a flame that marks the entrance to this mysterious underground restaurant.  When we walked down the steps, we could not believe the sheer size of this subterranean restaurant and bar.  We admired the Baroque design and beautiful ceiling frescoes.  We wished that we had more time to enjoy a dinner in this remarkable restaurant. 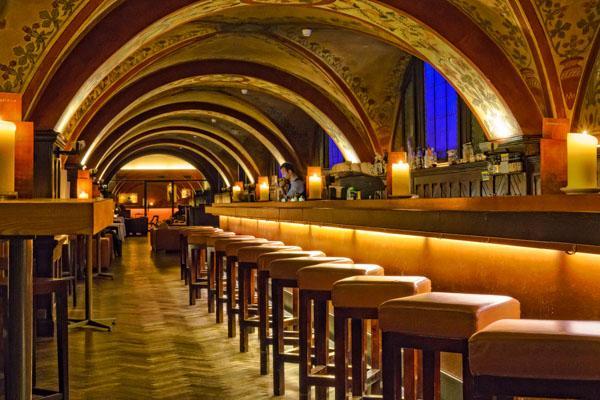 Many thanks to Bern Tourism for showing us some of the many interesting sights in Bern.  Below is some additional information about hotels, restaurants and activities in Bern.

Interested in a 24-hour itinerary for Bern? If all you have is a day to explore the amazing historic city of Bern, we found one worth considering.  Travel blogger Arzo Travels has a 1-day travel itinerary from her 2016 visit.  Follow this link to learn more.

Build your own Itinerary for a 3 day trip to Bern

Use this comprehensive list of things to do in Bern (Berne) Switzerland.

Hotel Bellevue:  This hotel is located right next to the Parliament Building, a beautiful building with a very nice lobby.  It is the only Swiss hotel with a real Presidential Suite.  Many stories from the books of John le Carre take place in this hotel.
Hotel Schweizerhof Bern:  Parts of the James Bond movie "On Her Majesty's Secret Service" were shot in the hotel, especially in the historic elevator.  The Sky Terrace, which is open from 11am until 11:30 pm in nice weather, is worth a visit.  The hotel also has a very nice spa.  It is conveniently located next to the central station.

Hotel Allegro: This is the hotel where we stayed and is mentioned above.
Hotel Best Western Bern:  This hotel is located in the center of the city, next to the Kornhauskeller restaurant.
Hotel Baren:  This one is very close to the train station and was recently renovated.  It now has 70 rooms.
Hotel Innere Enge: This hotel is especially good if you are travelling by car because it's not in the city center, but very close (5 minutes by bus). It is a jazz hotel, with every room dedicated to a famous jazz musician, and they also have a very nice jazz bar.  It is also the place where the famous Jazz Festival of Bern takes place every year from March to May.

Three Star Hotels and Other Lodging:

Hotel Alpenblick: A very welcoming and friendly hotel close to the city center in the popular neighborhood of Breitenrain. They have their own bees for their homemade honey. The house is more than 100 years old.
Am Pavillon B&B:  This site is only in German and the house is located very close to the train station
Hotel Goldener Schlüssel: This hotel is located in the Old Town and it is Bern’s oldest guesthouse
Hotel Landhaus:  This a young hotel in a more than 100-year-old building, close to the BearPark at the river side, and very unconventional and somewhat trendy
Marthahaus Bern:  Located in the neighborhood Breitenrain, close to the city center

Lötschberg:  This is the restaurant we enjoyed.  It's fun and trendy and located in the city center.  It offers Swiss specialities in an urban style
KungFu Burger: This is located in a former Chinese restaurant and offers a wide range of burgers, including vegan ones.
Bonbec: “Goodmouth” in French, this restaurant has a lot of Indian food but other types as well, located in the Rathausgasse, where it's also nice to just have a coffee or a drink
O bolles:  A nice place for having a coffee or a drink, has a small menu, but always very good, and popular with locals and young people
Lo Stuzzichino - Rathausgasse 23. They don’t have a website.  It is a very good Italian restaurant that looks more like a takeout place as the interior is very modest and simple.

Aare Swimming and other sports on the Aare river

The two most popular river pools are the Marzili and the Lorraine. At the Lorraine the water is a little bit slower and it is easier to get in and out of the river. The Marzili is the oldest pool in Switzerland and the Gelateria di Berna is right next to it.
Here is a short movie by the BBC about the Aare swimming so that you can better understand how to go about swimming there.
Aare surfing: A very new trend on the river Aare.  Take a look at a movie about it here.

Gelateria di Berna:  Don’t miss this little culinary excursion to Italy.  The Gelateria di Berna has locations on Mittelstrasse, Marzilistrasse (opposite the main entrance of the swimming pool Marzilibad) and Scheibenstrasse (Breitenrain) and is the best and most popular gelateria in all of Bern. Its creations, freshly prepared every day, range from classic delights such as vanilla to exotic temptations like raspberry with ginger.

Emmental:  Visit the Showdairy in Affoltern to see how this cheese is made.

Read about our 5-day dream trip to Switzerland.